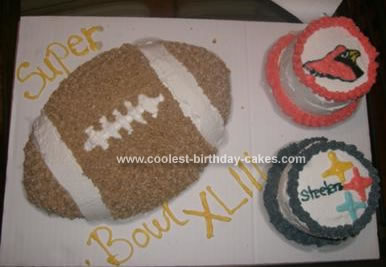 My boyfriend and I were having a football party and wanted to make a Super Bowl cake. I bought a football shaped pan to make for the cake. I thought the football wasn’t enough so I made two little cakes( I think they’re 4inch cakes). I printed out the mascots and freehanded them on the cakes. It was easier than I thought it would have been. The cake was a big hit. No one touched it till the 4th quarter cause they liked it so much.

I used a French vanilla cake mix for the football. I’ve found out it tastes so much better than plain white cake. The small cakes I did what was called cherry chip. It was good if you have a thing for cherry. For the football cake I don’t know what the technique is called but I used a star tip and did stars on the football. I thought it gave it more of a look of a football instead of just icing it