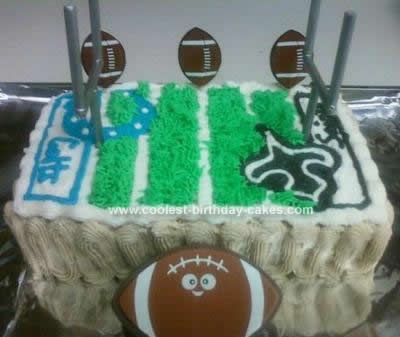 This is a Homemade Super Bowl Cake Design I made for Super Bowl XLIV, one of my favorites that I have made. This is just a regular 13 X 9 cake pan. Once cooled, I leveled it with a cake leveler. Then put on one thin layer of icing, just to catch all the crumbs, usually I put on another layer but since I knew I was going to be decorating the entire surface, I didn’t worry about it.

The team’s logos I got off the internet. Used computer paper and drew them out, glad they were not too hard to draw. Or if you have a printer you can always print them out. Or if you are good enough, you could copy them right on to the cake. Anyways once I drew them out I placed them on the cake and just traced them. Once I traced the shape of them, filling in the rest was easy. After that I decided where I wanted my lines to go and drew them in., using tip # 44, looks like the basket weave tip but with out the jagged edge. Or you could just simple turn it upside down, so the jagged part is facing down. Then I did the grass, which got a little tiring. I used tip # 233. I believe. After all that was done I finished up the goal areas and used tip # 22 to finish off the boarder around the cake , any of the star tips would work fine.

Just to make the cake a little more realistic I bought some sticks of wood broke them in pieces, enough to make a goal post, super glued them together and painted them silver, of course not the part that went in the cake though. Then added a couple of little football decorations and there you have it, a nice football cake great for almost any birthday or sporting event. 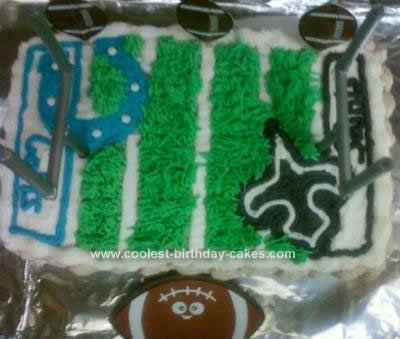