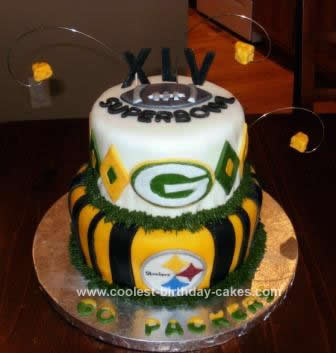 The lower 8″ round cake is chocolate, covered in yellow gold buttercream frosting, then covered in fondant. For the Steeler’s logo, I used a round cookie cutter to cut out the shape, then placed a smaller round fondant circle inside to create the silver border. I used Duff’s silver spray paint color.

The top layer is a 6″ inch white cake, frosted with white buttercream frosting and covered with fondant. The Green Bay logo was placed on top of fondant and cut out.

The cheese pieces were formed in a circle fondant cutter and then cut into fourths. I poked holes in it to create the cheese look. I used fondant, but suggest next time to use gum paste because it was heavy on the wires which made placement challenging.

It was a big hit at the game!