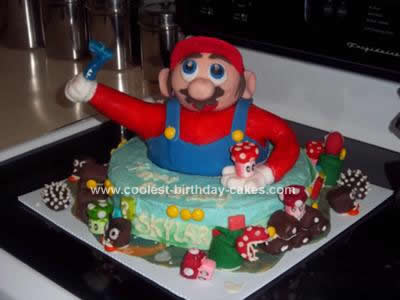 I‘ve been dabbling in cakes since I got married 30 years ago. My Aunt who made my wedding cake while in the hospital undergoing surgery in Denver Colorado inspired me. My four-tier wedding cake was then flown to Texas where my parents resided then driven to Arkansas where the wedding took place. Ever since I have had great enjoyment in the cakes I create.

My Grandson Skylar just turned seven in March and he is totally into Mario. So came the request for this Super Mario Birthday Cake. This is only the fourth or fifth cake that I have done in fondant. I didn’t like the taste of the typical fondant. The typical fondant is eatable but is often removed and thrown away because of the taste. I have recently found a recipe for marshmallow fondant and it taste great.

All my cakes are made from scratch. The Mario cake foundation layer consisted of white cake in which I added ½ teaspoon of three flavorings. It was then covered in Butter cream icing that also had the same flavorings. Sometimes I add flavorings to match the persons taste. Some examples are Almond, Raspberry, Coconut, & Blueberry but there is hundreds out there. I like to try different ones. In this case it was Vanilla, Almond & Raspberry Extracts. The Mario character was made from rice crispy treat (which is light in weight and kids will eat) covered first with butter cream to fill in and smooth the bumpy texture. Then I covered it in Marshmallow fondant. Marshmallow fondant was made from one bag of marshmallows placed in a microwavable bowl with 1 tablespoon of tap water and ½ teaspoon of each favoring. I mirowaved it for 15-30 seconds, just long enough to soften not melt the marshmallows. Then I add small amounts of powdered sugar at a time. Slowly mixing with my hands. I added sugar till I got a consistency of play dough. At first it was very sticky but I added sugar until it began to stick to itself. It helps to powder yours hands with sugar before and during mixing. I broke off pieces and added color. Using coloring paste (liquid colors will change consistency) to the small pieces. The fondant when dried will hold its shape but is still flexible enough to eat. I usually leave it overnight. Sometimes using supports (such as tooth picks, aluminum foil, a bowl etc.) to get the desired shape. I used water and a small paintbrush to glue the pieces together. The fondant will stay soft if stored in airtight containers and it does not need to be refrigerated. If it becomes to dry add water a drop at a time and knead it.

I made all the other characters from regular marshmallows of different sizes, some were dipped in chocolate or covered in fondant, then I detailed them with butter cream icing. I also added yellow M&Ms for coins and buttons and squares candies for (?)blocks. The fondant & butter cream seals the moisture in the cake and the cake can sit at moderate to cool room temperature for several days. Extreme heat will make it sweat, colors will run and the fondant could actually slide off.

The whole cake was totally editable except for 3 wooden dowels, 2 in the center to keep Mario from sinking and one in the out stretch arm to connect & hold the weight of the arm. And none was left at the end of the party.