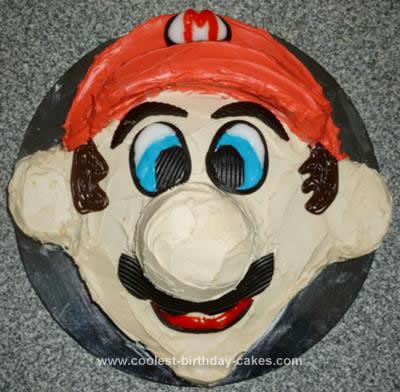 Here is the Super Mario Bros. Birthday Cake that I made for my son’s 6th Birthday.

Initially he wanted a cake in the shape of a Wii and then it was a Wii controller?!? But seeing as most of his favourite computer games are based on the successful Mario Bros Dynasty, we narrowed it down to Mario himself. At first I thought it was going to be a difficult one but actually it ended up being quite easy!

You need 2 basic round cakes. I used 2 bought butter cake mixes but you can make your own if you want. Keep one cake in tact and the other you need to trim off the top for his hat and the bottom (a smaller section) for the hats brim. This makes the hat 3d. From the same cake you need to cut out 2 circles ( I used a large scone cutter). Cut one of these circles in half, these are the ears and the other circle is for his nose. Mario’s nose is quite bulbous so you can use a sharp knife to make this more rounded! Then just use an offcut of the 2nd cake to make a small rounded piece for his chin.

NOW THIS IS THE BEST TIP ANYONE EVER GAVE ME…. If you have time put all these pieces together to form Mario’s face and cling wrap it and freeze overnight. A frozen cake is soooo much easier to ice than a fresh one, especially if you have sharp small edges.

So the next day (if you had the time) organize all your icings and colours. I cheated and used Betty Crocker’s Frosting in white that comes in a container and it was fantastic. I usually make my own butter icing but I thought I would give this a go and now I don’t think I can go back! Coming up with the skin colour was a bit of a problem and I experimented with blending all the colours together but then I came across “Parisian Browning Essence” in the cooking section with all the other bottles of normal colours. Worked wonders to get that ideal skin colour, so just blend it little by little until you get the desired colour you are after!

So plaster all the skin colour over the entire cake excluding his hat. Then use “Pillar box Red” colour for his hat. Next you need rolls of flat licorice. Cut small strips to bend to make circles for his eyes and then rounded pieces for his eyeballs, eyebrows shapes and his moustache. Using decorating/writing tubes in blue and red, fill in his eye colour and mouth. I didn’t have a white one so I just mixed plain icing sugar and a little water to come up with a think white icing. Use this for his eyes and the “M” on his hat. With more licorice for his Initial on his hat and underneath his mouth. I then found a tube of chocolate fudge writing icing and made squiggles for his side burns.

Funnily enough Mario has brown hair but black facial hair? So I guess you could play around with that if you needed to. The cake will defrost as you are icing and you end up with the freshest cake underneath.

My son had a timezone (computer game parlour) party and all the parents and staff were in amazement and didn’t believe I actually made it but you know give it a go, you will surprise yourself!