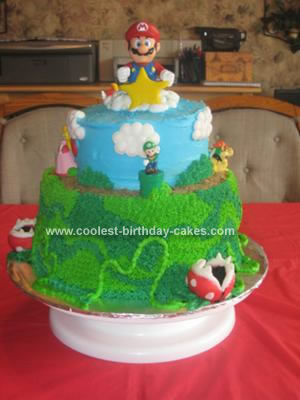 For my son’s sixth birthday, he begged for a Mario Brothers cake. After searching in vain for a Character cake pan that would work, I realized I was going to have to get creative.

To create the path between the ground and the sky, crushed up chocolate chip teddy grahams. The small pieces of chocolate chips looked like little rocks around the path. I used fondant to create the Question blocks and Stairs to the clouds. I had to insert toothpicks to get those to stand, they were to heavy to press into the icing without sliding down.

The clouds are white icing. I placed the characters in their appropriate setting, Bowser with a fire ball made from fondant, Peach with a heart made of fondant. And of course, Mario at the top holding his beloved star, also made of fondant.

I had lots of fun making this cake and it was HUGE hit! And all said and done, it was VERY easy once I had the characters to build around.