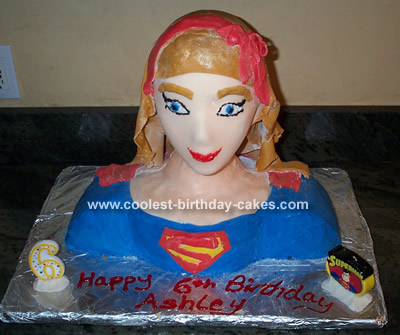 My little girl wanted Supergirl as the theme for her 6th birthday party. I searched far and wide only to find out that there are no Wilton molds. She was specific that she wanted the cake to “stand up” and that it had to be a girl not man.

I found a styrofoam female wig head at Sally’s Beauty Supply. Other sites that feature the Spiderman 3D use rice crispy treats for the head. I thought about it but settled on the female wig head since it seemed easier (it already had the face carved out).

I made 3 layers of chocolate cake (1 1/2 boxes of cake mix) for the chest. The sides were 3 thin layers of French vanilla cake quartered and turned on their side. Instead of wooden dowels (which are expensive and its hard to pierce the Styrofoam with), I used long wooden skewers cut to height of the cake. The head was just rolled fondant.

I dusted a little gold dust on the hair to try to make it look real. The lip gloss is red gel. Everything else on the face was piped buttercream. The chest and sleeves were made of buttercream frosting which I used a spreading knife and carefully got rid of any “spread marks”.

The “S” on the chest and the cape were made of fondant. Both were cut freehand. The cape extended to the end of the cutting board.

For candles and goodie bags my little girl let me use Superman items since there were a number of boys and it was easier to buy items in bulk. I filled them with Superman cookies tattoos, stickers, pencils, glowing ring lollipops and blinking necklaces. (I improvised and said that the blinking necklaces were like “kryptonite” to try to keep with the theme).

Since I was 7 mos. pregnant and had a broken leg I just didn’t have the energy to put together party activities/games at the house. So I wussed out and had the party at a large moonbounce facility that specializes in private kids parties.

The kids and their parents (even some grandparents) looked super as they jumped on slides blasted through obstacle courses and jumped inside moonbounces. My little girl loved the party and the cake so much that she says she wants the same party and cake again next year. And all the neighborhood kids are asking me to make their cakes too! 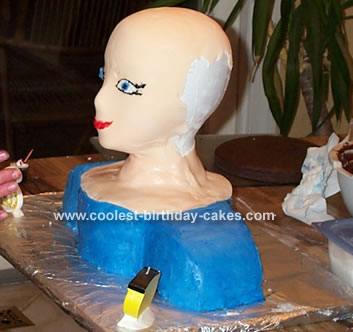