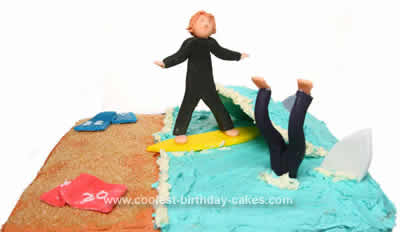 I wanted to make something different for my son and his girlfriend whose birthdays are the day after each other. They both enjoy surfing so I looked through many pictures online and came up with my own version of a surfers cake, including my son’s girlfriend being upside down in the waves ( which she quite often is apparently!).

The beach is coloured butter icing sprinkled with demerara sugar. The wave was made out of modelling paste and dried over a bowl to give it the shape. The sea is blue butter icing.

The figures and surfboard items made from modelling paste were made a few days in advance to allow them to dry. The shark was added for effect, I hope we don?t get too many of them in the UK.

The cake is just a sandwich cake mixture made in a square tin. I used the towels on the beach to add their first initial and ages.