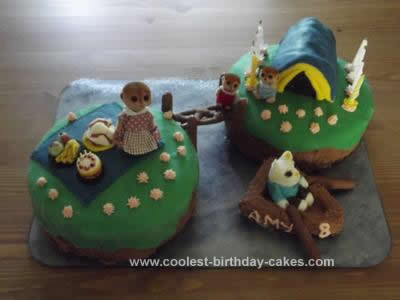 My daughter requested a Sylvanian cake for her birthday this year. So I had a look on-line and was surprised to find so few ideas around. So I waited for inspiration to strike!

I decided to make a Sylvanian birthday islands camping cake. I baked two 7 inch round cakes and one square (although the square was mainly because it meant I could bake 2 cakes at once).

I put the cakes in the freezer to make them easier to ice. I filled the two round cakes with chocolate butter icing and spread the icing around the outside to look like the muddy banks of the river. I put a thin layer of icing on the top of the cake and then placed a rough circle of green colored regal ice smoothing down over the edges as the grass.

I made a square from blue regal ice and placed this on one of the cakes, using the end of a cocktail stick to make the detail of the tassels. I made the plates in the same way. The sandwiches were also made out of regal ice painted with food coloring. I had intended to use marzipan but had so much icing it seemed a waste not to use it! The bananas and apples were shaped by hand, painted with food coloring and the small detail on the banana was painted on using a cocktail stick. I used cloves for the apple stalks. The small picnic birthday cake had eight candles made out of spaghetti.

I cut 3 small triangles from the square cake and used butter icing to stick these together to make the tent shape. I used black regal ice on one end taking it over the top edge of the tent to ensure full coverage and neat edges later on. The tent flaps were made from a large yellow regal ice triangle with a slit down the middle. I placed this over the black end and used a cocktail stick to curl the edges. I then rolled out the blue icing and placed it over the tent using a very sharp knife to cut off the excess and smoothing it down.

I used 4 Cadbury’s chocolate fingers as the bridge posts and secured these to the cake with butter icing and spaghetti. The bridge itself is a curly wurly cut to length and supported on 2 pieces of spaghetti pushed into the sides of the cake (warning: be careful to remove the spaghetti before the cake is cut as it can cause injury!).

I cut a boat shape out of the remainder of the square cake and hollowed out the middle to make the boat. I cut notches out of the edges for the oars (chocolate fingers) and covered the boat in chocolate butter icing. The bear was my first attempt at making a figure. I made each part separately out of regal ice painted them with food coloring and stuck them together with normal butter icing).

I used red food coloring to make the pink icing for the writing on the boat and the flowers. The Sylvanian Meerkats were from my daughter’s collection!

Mix the melted butter and sugar. Mix together the eggs, vanilla essence and water and add to mixture followed by the flour and baking powder (sieved). Cook at 175 (fan oven) for 20 minutes. 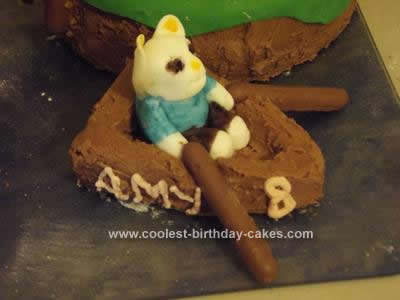 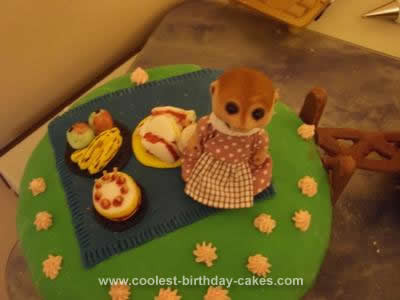 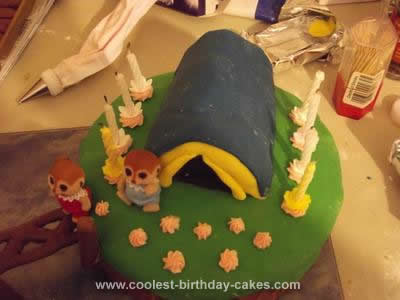