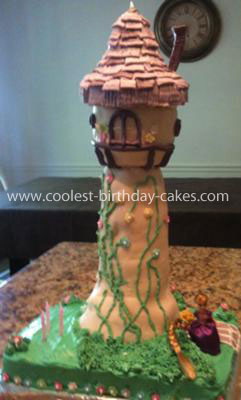 My three year old daughter loves Tangled so I thought we should have a Tangled birthday cake. I did some research online and found some great ideas for making the tower etc. I asked my wife what she thought and she said to do what ever I wanted. Of course, because I love my little girl I wanted to giver her a Tangled cake.

Yep, I’m the Dad, my wife is a wonderful cook, but is not a big fan of spending lots of time on a birthday cake…so I decided to take on the task. This was my first try at something this complicated!

I began by using rice-crispy treats to mold the tower pedestal, the house, and the roof separately. The tower portion was molded around a dowel bought at Home Depot. The house was molded in a plastic bowl from the kitchen and the initial mold for the roof was a funnel.

After everything set I used a knife to shape them further. I wish I would have used less butter in the rice-crispy treats so that they would not have been as susceptible to heat. Anyway, after making sure each piece would fit squarely on the other I made Marshmallow fondant to cover the tower and house. A layer of butter cream was put on the rice-crispy then the fondant rolled on. I colored more fondant purple and then used a stake knife to give a shingle look for the roof. I cut the shingles out with a pizza cutter. Frosted the roof then placed each tile on one at a time. I decorated the house with rolled fondant to make windows doors and planter boxes. The Chimney is shaped fondant with a tooth pick inserted for stability. After that vines and flowers were added with Royal icing. The cake was assembled with wooden skewers. Other details like grass and so forth were also added. Grandpa bought the doll.

Overall this was really fun and brought back my model building days as a boy. I think it turned out really nice. My daughter loved it which, for me was the most important part. Hope you enjoy this version of a popular cake these days. P.S. be sure your Air -conditioning does not go out in the middle of the project as this will be BAD for the stability of the cake…personal experience.