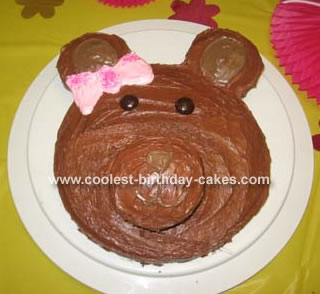 This teddy bear cake was for our daughter’s first birthday. I got the idea from another submission on this site but altered it a little because it was for a girl.

This cake required 2 8″ round cakes and 3 large cupcakes. After leveling the round cakes, I iced them in chocolate frosting. (I would recommend tinting white frosting brown not using chocolate.) Two of the cupcakes became the ears. I trimmed one side of each so they laid flat against the head. I frosted them and added lighter brown for the center of the ears. The last cupcake became the bear’s snout.

I added lighter brown frosting for the mouth and nose. I used Junior Mints for the bear’s eyes.

Because this cake was for a girl, I tinted some frosting pink and made a bow instead of a bowtie. I would not recommend using whipped frosting for those details. It is too fluffy.

Coolest Me to You Teddy Bears Cake