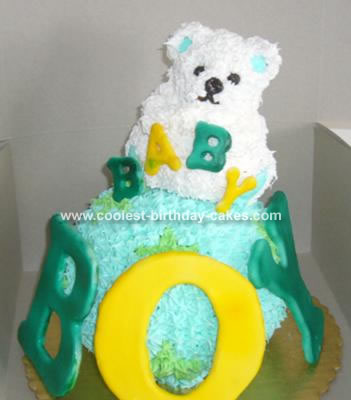 This teddy bear cake was for a gift at a baby shower. I used the mini bear cake pan and ball cake pan, baked as directed.

The ball and bear were decorated using a #16 star tip with colored buttercream frosting. I use Wilton’s recipe but instead of just vanilla I use a mixture of vanilla, butter, and almond extracts for a less sweet taste.

The lettering was wood letters covered in fondant and then sprayed with the two colors, I think spraying the colors on fondant is easier and gives it more of a glossed look then hand mixing. Just make sure you let them dry before picking up as I got green on one of the yellow letters because the green was not dry yet.