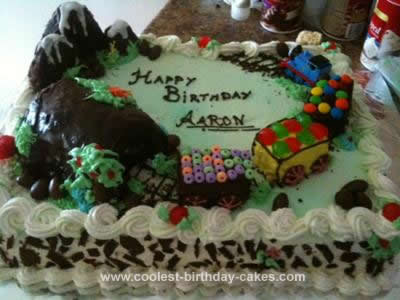 I made this Thomas birthday cake for my friend son’s birthday who was turning 3 this February. The only request the birthday boy made was that he wanted Thomas coming out of tunnel.

I reviewed various options and then decided on using rice crispies for the tunnel and mountains. I baked 2 9×13″ chocolate cakes (followed the recipe on back of Hershey cocoa box) and the birthday boy’s mom baked 2 9×13″ French vanilla cakes (box mix). The party was for almost 60 people including the kids so I had to make 1/2 sheet cake.

I assembled both the cakes side by side. I filled with whipped cream and topped them with cherries within the layer. I covered the entire cake with whipped cream, covered the side with choco-flakes. I made mountains with rice -crispies and used the same for tunnel. Once the tunnel was made, covered it with scraps of choco-cake (scraps left while leveling the cake). Once done, poured chocolate ganache on top of it, left it the way without smoothing it out to give a rough look.

I used same ganache to cover the mountains. I poured little white icing over the top of mountains once the ganache cooled down to give it the snowy look. I put toothpicks on the base of tunnel and mountains to assemble them on cake. I used edible green color spray to cover the top of cake to give the green look. I made three train boggies with the scraps left from leveling out the vanilla cake. I covered them with store bought butter cream (colored them accordingly with food color). I made the tracks with chocolate butter cream and placed the boggies and Thomas engine (toy) on the track.

I decorated the entire cake using grass tip, star tip, leaf tip and so on. I used candies to give the look of rocks and stone. I made the borders and again decorated it with cherries. The cake was loved by everyone and I felt happy in the end. 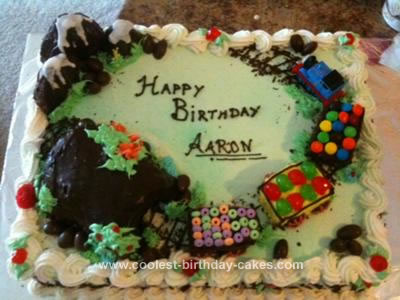