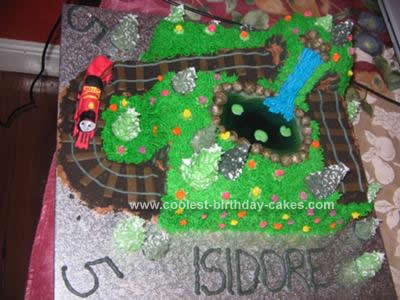 My now 5yr old son has loved Thomas since I can remember, and as he was turning 5 wanted a ‘James’ cake (the number 5 engine) for his birthday. I wasn’t that keen to do another cake shaped like a train – I’d already made a Thomas cake for his 3rd birthday – so I turned to your website for inspiration and came across the Island of Sodor cakes which I thought were perfect as I could incorporate James into it somehow.

So I started this Homemade Thomas the Tank Engine ‘James’ Island of Sodor Cake by sculpting James out of store bought fondant icing that I added tylose powder to to help it stiffen up and set quicker that I coloured with red gel. As I was a bit time and cash poor, I painted the black on with black paste colouring leftover from a previous project (it costs about $16 for a small piece of black sugar moulding paste) and the yellow I was able to get on by using a white powder colour, mixed with yellow gel colour and a bit of cake decorating alcohol to thin it out ( I know it sounds expensive but they were all leftovers from previous projects and they last quite a while). For the wheels I used piping nozzles to cut them out of a rolled out piece of sugar paste and attached them with skewers. For the face, I just googled a James face and reduced and printed it out and stuck it on with a bit of water.

The cake tin was 9 inches and I used a Mars bar cake recipe. For the rocks around the pond I used several colours like brown, green, and grey which I just partially mixed into the sugar paste giving it a marbled effect – I then rolled it out like a sausage and cut off different size pieces to make the rocks, I also smeared a bit of oil on them to make them look wet and more real. I used buttercream icing for the bulk of the cake, first doing a crumb coat with a chocolate flavoured buttercream. I then laid the gravel for the tracks – crushed oreo cookies, the track sleepers were also made from sugar paste and I piped grey buttercream to make the tracks.

The hill I made with a bit of cake I had leftover in the freezer which saved me baking for just a small area, it was a small square block that I carved into a mound with a knife and then attached it with buttercream and covered it with the same buttercream. I then carved out small openings for the tunnels and cut out a ramp into the cake so the tracks went down and around back into the cake. The trees were then attached to the cake and the cake board with more buttercream icing. I then piped the grass- which is really easy with the special nozzle that you can find at most cake shops or Spotlight. The waterfall I piped with a nozzle that has 3 fine holes, but any plain small hole nozzle ( like the ones you use for writing with) will do, it could be any other nozzle also a star or shell even.

To make the pond I rolled out a small piece of sugarpaste to line the area that I had carved out of the cake and covered first with buttercream, I then added blue bubblegum jelly to it (letting it cool right down first so as not to melt anything. I placed a couple of lilypads, also made from the sugar paste, into the pond. The jelly set and was ok, but I noticed that the sugar paste absorbed some of the moisture from it making the lily pads expand a bit and the level of the jelly sunk a bit overnight. It wasn’t so bad that it ruined the look of the cake but I’m sure if you know your stuff you could probably substitute something more appropriate. I finished it off with different coloured flowers that I piped using buttercream with a tiny star nozzle.

It took me maybe 5-6 hours in total which I did slowly over two days – preparing all the sugarpaste bits ahead of time (you could even do them a week or 2 in advance) and then baking and icing the cake the day before. I didn’t refrigerate the cake overnight and it was perfectly fine the next day. 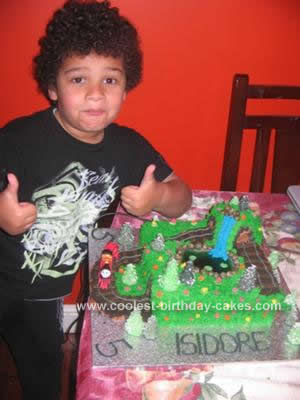 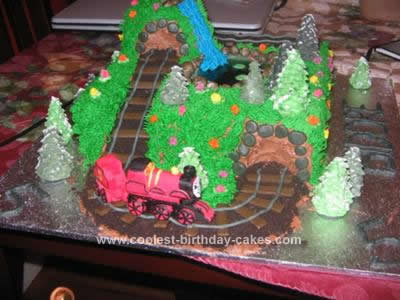