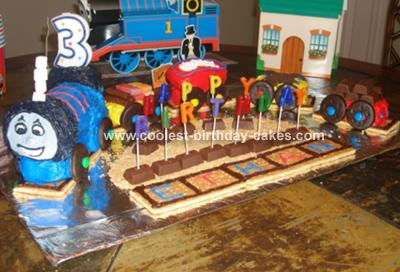 I used this website for several ideas for our Thomas the Tank cake – thanks for the help. However, many of the engine cakes I liked used a 3-D cake pan, but I couldn’t find one. Thus, I had to improvise on the engine as well as other areas. I used one regular yellow cake mix and baked the mix in a 9 Wilton mini-loaf pan. I baked the remainder of the mix in two small tomato paste cans.

The engine was a combination of two mini-loaves on the bottom, the round cakes cut and placed on top. Then, one mini-loaf cut in half and the two halves stacked on top of one another for the back portion of the engine.

For Thomas’s face, I used Wilton white fondant icing, rolled it into a thin layer and used the bottom of the tomato paste can to cut the circle. (Note: A thin/soft sugar cookie could be used just as easily). I used a very small amount of black Wilton icing coloring to shade white icing to grey. I then drew his face with black icing. The face was attached with toothpicks and black icing was piped along the edges to connect to the cake.

Graham crackers with chocolate icing served as the tracks. A convenient thing was that each car fit nicely on one cracker (the engine took two). The cars were simply a single loaf or two loaves stacked on top of one another. The wheels were thin mint Girl Scout cookies with an M&M attached with icing. Various candies (including white Nerds and crumbled Oreos) were used as rocks and coal in the cars. A small center portion of the loaf was carved out for these cars.

Additional graham cracker tracks were used to spell out the birthday boy’s name. Crumbled graham crackers where sprinkled in the middle for dirt. Individual letter candles that spelled-out “Happy Birthday” were inserted into a Hershey’s nugget and placed on the dirt.

All of the icing colors were used with Wilton icing coloring that I already had. However, regular food coloring could suffice with the exception of buying a black color separately. This cake-making event ended up taking a majority of the day. However, the kids were able to participate as my 8-year old daughter, Kelsey, made one car by herself and she and my 3-year old son, Ethan, enjoyed crumbling up the cookies/crackers and he loved the cake!