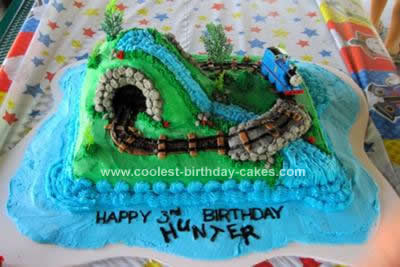 First of all – thanks to Christina R.! Her cake really inspired me and my cake is a copy cat cake of her Thomas the Train Island of Sodor Birthday Cake! I am new to cake decorating and her post helped me a lot!

For my mountain – I just baked a 13 X 9 cake that I cut, stacked and carved using butter cream frosting for the ‘glue’. I didn’t have any dowel rods so my cake does not have any additional support but it did not seem to need it. My mom didn’t think it looked at all like a mountain until she saw the finished cake. After assembling the mountain I crumb coated the entire cake.

I first frosted all the green grass areas – then the blue water. I let the cake set in order to form a crust – I think that is the right word – before coming back and adding the details. The stones on the tunnel and bridge are just mini marshmallows cut in half and coated in gray frosting. I used a flat tip to pipe on some ‘mortar’ and then added the stones. The bridge is a rice crispie treat – just the store bought kind – cut with a sharp knife to shape. I placed the bridge, frosted it and put the stones in place. Some of the left over marshmallows I cut up even more to use for the small rocks at the bottom of the water fall.

I used some of the left over cake from the 9 X 13 cake and crumbled it up, mixed in a little sugar and brown sugar to make the dirt under the railroad tracks. My trees were store bought then cut to size.

I realized that there was no room to write ‘Happy Birthday’ so that is when I came up with the idea of adding another foam board under my existing cake board. My boyfriend cut the foam board to give that ocean wave look. I put some frosting on the foam board before placing the cake board on top of it – just so that it would not move once it was in place. Then I made another recipe of butter cream frosting – colored it blue and created the ocean!

It was lots of fun to make – I have to admit it took longer than I thought. I probably spent a total of about 8 hours just assembling and decorating it. It was worth every minute! My grandson loved it. He and his friend dived right into the ocean – licking the icing off their fingers. Then they drove Thomas all over the tracks – at first I didn’t want him to ‘mess up’ the cake but then decided it was his cake and he was loving playing with it and eating it!

Thanks again for the inspiration Christina! 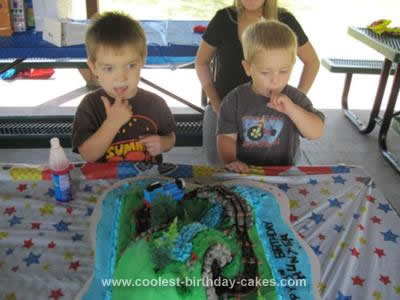 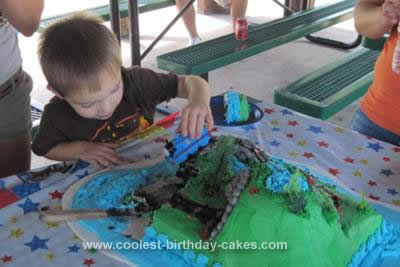