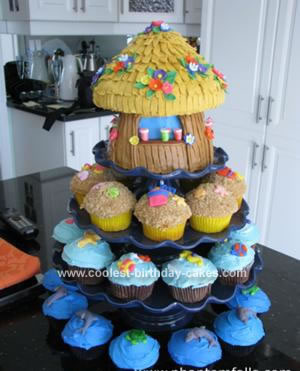 I made these Tiki Hut Cake and Beach Cupcakes for my bridal shower. We’re getting married on the beach in Cuba, so I figured the bar hut and beach theme would be appropriate.

I pre-made all the fondant decorations, and let them dry. The bar counters, cupcake decorations (fish, shells, dolphins), flowers and drinks are all fondant, but marzipan might work well too. I used a mold to make the sea shells, sea turtles, fish, dolphins, and seahorses. The flip flops, beach bag and sunglasses, and the drinks were done by hand. I used cutters for the flowers and leaves, and hand cut the counters. The sea shells and the drinks were coloured with food colouring.

The top tier was made with the Wilton giant cupcake mold, with the cupcake base upside down (the bigger part is on the bottom, instead of the top). I made a lemon pound cake, to make it good and strong, using this recipe… and using the modifications suggested by seyi621 in the comments

I carved out the openings for the bar, and the doorway, and then covered the base with flat buttercream, brown for the walls, and blue for the windows and doorway. I used the flat side of the no.47 to pipe the wood sides, and a round tip for the pole/supports around the doors, and by the windows. I iced the underside of the top part of the giant cupcake, and placed it on top to make the roof. Then, I flat iced the roof with yellowish brown, I used tip no.48 (basket tip) to pipe the straw roof, starting with the base, and working my way up to the top. The last step was to add the fondant bar counters, flowers, and drinks.

The sand cupcakes were vanilla, iced with leftover brown buttercream from the hut walls. I topped them with brown sugar ‘sand’. I mixed light blue for the next layer, and dark blue for the bottom water layer, and simply iced the chocolate cupcakes. I left it kind of choppy to look like water. The last step was to add the fondant shapes (flip flops, sea shells, and beach bag for the sand, fish, sea horses and coral to the light water, and dolphin and sea turtles for the dark blue), and affix them with a bit of buttercream.