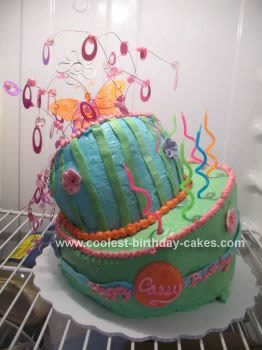 This Topsy Turvy Birthday Cake is a cake I made for my sister’s 13th birthday. I didn’t want to use fondant so it is done with buttercream frosting.

I used Mississippi Mud cake, which worked well. I sliced each layer from one top side to the opposite bottom, so diagonally. Then flip it so that the thin sides are together. Layer like you would a normal cake. Carving the layers into the shape you want. You’ll need to cut a hole where you want your next layer to set, so that it will actually be a flat surface.

Frost as normal. Don’t forget to put some form of support in. I used candy sucker sticks and then a cut cake board that my second layer sat on. I also used a sponge paint brush to smooth out the frosting.

The toppers were things that I found at Hobby Lobby and just washed. The butterfly is actually one of those picture holders. I also cheated at bought the sugar flowers, simply because I was pressed for time, but they could easily be done yourself. 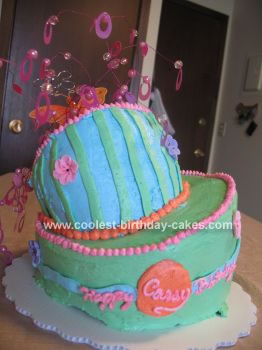