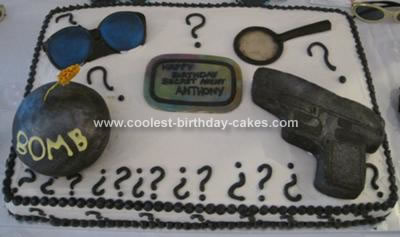 This Totally Edible Spy Cake Idea was requested for a fan of the Cody Banks Secret Agent movies. He gave me specific directions as to the items and placement of items on his cake. He wanted everything edible so I did it! The bomb is solid chocolate that I made with a ball mold. The wick is just some gold wire twisted together with gumpaste stars pasted on top of each other and then dipped in sparkles so that it would flicker as if it was lit.

I wrote the word bomb in royal icing. The sunglasses are chocolate dusted with blue luster dust. Both the sunglasses and the bomb were made using chocolate molds. The magnifying glass is made of a melted sugar combo hardened to make the glass. The frame and handle are made of chocolate. The gun is actually a rice kripsie treat that is covered in chocolate. I then carved the details into it lightly so they were visibly, but did not allow the rice krispie treat to be seen.

The nameplate in the middle is made of white chocolate that I poured into a food storage lid so that I could have a great shape. I then painted it up and wrote his name on it. The cake was just a vanilla cake with buttercream frosting.

I made the gun by lining a pellet gun box with Saran wrap and filling it with packed rice kripsies. Then I pulled it out and dipped it in melted chocolate. This cake went over very well, it was exactly what he wanted, and he was very impressed! I was told that my bomb was “THE BOMB” LOL! And my favorite was my rice krispie gun! I think that it came out awesome and it is by far my favorite piece!!

There are not many cakes that I do that I end up liking as much as this one!