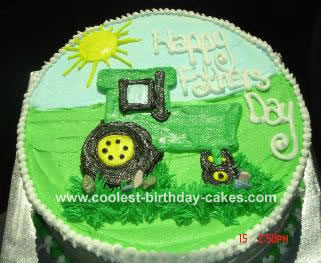 I made this tractor cake for a Father’s Day celebration. We were on a farm in St. Paul, Oregon, so I thought it would be fitting to put a tractor on the cake.

It was a 12″ round 4 layer vanilla bean cake with raspberry filling. After baking the cake I chilled it to make it easier to frost. After getting the white buttercream layer on the cake I took blue and green colored buttercream and made the sky and the grass background.

To get the tractor I wanted I first downloaded the picture from a John Deere site and printed it so that I had a picture to go off of. I used a toothpick to draw an outline of the tractor in the icing. I then took a parchment bag with a medium sized hole cut in it (no-tip) to trace the outline with the icing. I used the same bag to fill in the outline. Using a spatula and a little warm water I evened out the icing.

I then used a #2 tip and black icing to make the tires, window, and exhaust pipe. I used yellow for the wheels and filled it in also using water to even it out. I filled in the window with blue icing and added a sun all using the same method.

For the grass I used a grass tip adding some candy rocks for extra detail. The bottom border of the cake was a star tip that I alternated with green and white. The top border was just white drops made with a #3 tip in white buttercream.

Overall this cake was easy to make, it was a simple design dressed up. It was a good design for this particular get together as it was for young and old!