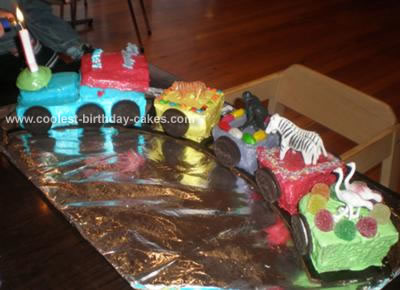 This train birthday cake was quite easy to make. I just used cheap packet sponge cake mix. I cooked the main carriage with a large loaf tin and the carriages with disposable aluminum loaf tins (the ones you get take away food in).

I used 2 of these and cut them in half to make the carriages. I used Betty Crocker ready made icing SO EASY AND NICE TOO! I put food colouring in the icing to make it different colours. Had a little trouble with the red icing because when you mix red with white you get pink so I kept adding red to it and it finally became the colour I wanted.

I brought candy letters from Coles and placed Ridley’s name on the main carriage and cut a little photo out of him and placed it at the front in the window. I brought little toy plastic animals and used them on the carriages and put lollies around the sides just for decoration.

I used the 2 metre long licorice for the train tracks (must cut long bits in half long ways) and Oreos for the wheels. I used a cupcake left over from the mixture for part of the chimney and placed a number one candle on top to finish off the chimney.

It was a big hit, took about 3 hours of ice and decorate. And all up it cost me about $25 to make. Also I used an old nappy box for the base and covered it with foil.