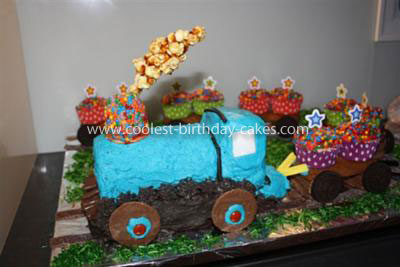 For my son’s first birthday, we decided to do a train cake, as he wasn’t really into any particular character or other theme at that point, but he had a train themed nursery, and seemed to like it!

We decided to make a cupcake carriaged train cake, so made the cupcakes and the main cake sponge out of white choc mud cake. The carriages were individually baked ginger bread cookies made into large rectangles, stacked onto Tim Tam biscuits, with Oreo wheels.

To make some grass, we dyed some coconut green. To make the steam for the train, we caramelized some popcorn around a skewer coming out of an ice cream cone – quite tricky and took a few attempts!!

Overall a real hit at the party, with people eating all parts of it – including the gingerbread carriages. 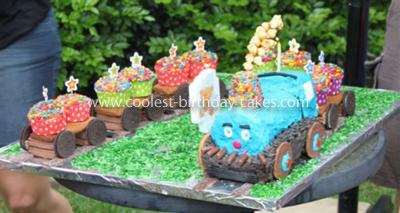