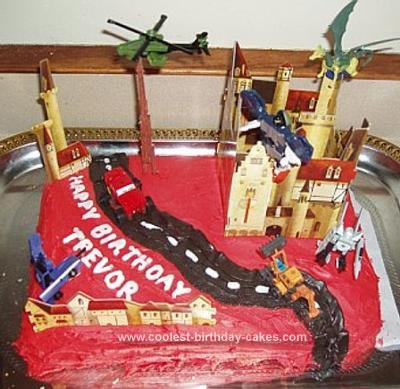 Using a 9 X 13 pan, made the 1234 cake off of the Softasilk Cake Flour for this Transformer Battle cake. I cut the cake in two layers and spread jam and frosting in the middle, then replaced the top layer. I made buttercream frosting, dying portions red and black separately (used food coloring gel.

I then frosted the entire cake red, piped on the black highway using the black frosting, used a purchased white writing gel for lines and writing the birthday wishes. We used cardboard cutouts from a fast food toy for the buildings.

My son (age 11) thought of suspending the helicopter minicon (luckily it had a hole on the bottom of the copter that I stick on that piece of cardboard). We anchored the dragon with some playdough stuck under it. I bought a handful of minicons which we placed around the battle scene.

Of supreme importance was that the good ones were all attacking and the bad ones were defending. This one was fun and easy!