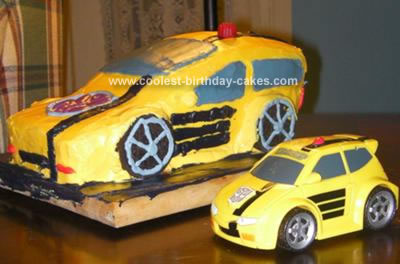 I made Bumblebee for my son Ian’s 4th birthday. This is the cartoon version. There are a ton of variations of a Transformer Bumblebee Cake. Each franchise has their own spin and subtle look. I used a loaf pan and baked a chocolate cake for almost twice the time recommended on the box.

Then I trimmed it down to what I thought a looked like a sporty little hatchback should look like. Coated the whole thing in a layer of white icing then mixed up some yellow and some black icing. And a tiny bit of red icing and some grey (actually I just added a lot of white to the left over black.)

I used Oreos for the wheels added the icing to accent the wheels after they were on. Bumped out the fenders over the wheels with some left over yellow. Piped some black stripes down the top and some more on the sides. I had my husband draw the design on piece of waxed paper then cut out the paper and laid it on the hood and piped icing around it. Then used a red juju-bee on the top.