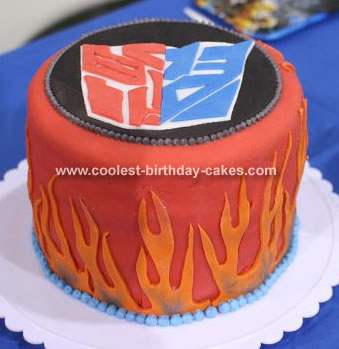 My son wanted a transformers birthday party theme. I used several different cakes from this site for ideas. He knew he wanted the Transformer cake to be half autobot and half decepticon logos, so I made them similar to the ones I liked the most on some other cakes on this site.

He also liked the flames on a different one I showed him, so I put the flames on the sides. The cake was a 4 layer 8″ round, chocolate. I brushed Wilton cake glitter on the top of the flames in red and at the base of the flames in blue, though it doesn’t show well in the picture, it looked really cool in person. Most of the frosting is rolled fondant. It had chocolate buttercream underneath for the eaters who don’t like fondant. Also the two “dotted” borders were made with buttercream.

The cake was a big hit at the party and my son loved it.