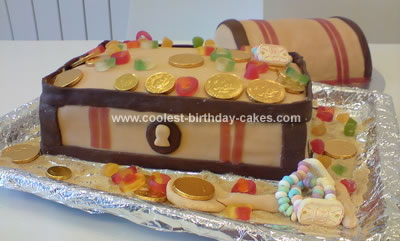 This is my first time making a party cake. This Treasure Chest Birthday Cake was for my son’s 3rd birthday party, Pirates, of course. After a week of trials I couldn’t decide whether to do a chocolate cake or sponge so decided on both. I needed to serve 41 but it turns out as usual I have over catered since I have half of each left. Plenty enough after for people who couldn’t make it and neighbors etc.

The base is 2 sponge cakes, 18cm x 28cm. Each is made of 10oz SR flour, butter and cup Sugar and 5 eggs. I used a hand blender to make things easier and folded in the flour at the end. I sandwiched the two sponge cakes together with strawberry jam and butter cream. More butter cream was used to cover the cake.

For the ‘lid’ I used the following recipe:

http://www.bbcgoodfood.com/recipes/4689/chocolate-cake. I reduced this to a 3 egg recipe and made a 18cm round cake- TWICE! I halved the cakes to make a semi circle. I split it in two the other way to make the layers thinner (8 in all). All that dark chocolate is quite bitter for a kids party so the filling is made with milk choc. Again, extra ganache was spread over the cake (BTW I could have made this much thicker to help glue the layers together some more)

For both cakes I learnt that when the temp is too high the cake crusts too much on top. I used top and bottom heat at 140 deg Celsius. Beware that oven temps can vary!

I got some ready to roll icing (white) , 1kg and also some light brown 750g and dark brown 250g icing from eBay. I mixed the light brown with the white to make up the volume. I thought I will be making more cakes in the future so I invested in a variable sized square cake tin (silverwood) and a non stick rolling pin.

I rolled out the icing following some video instructions found on the web. (Cornflour is much easier than icing sugar to stop it sticking when rolling it). The dark icing was used to edge the chest and fruit winders used as straps.

Top with sweets. I put candles and name on the lid. Glad I did them separate because the cakes are quite heavy. Edge with brown sugar for sand.

Thanks for this web site. Without this I wouldn’t be quite so inspired or brave. 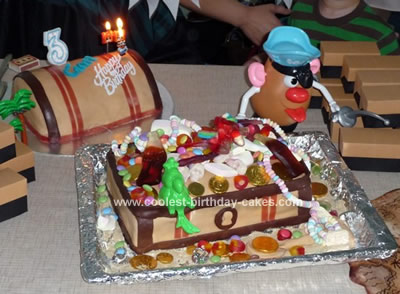