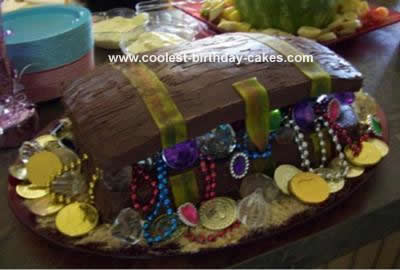 I made this Treasure Chest Birthday Cake with box cake mix, following the directions and just making sure to use my stand mixer to make sure it was thoroughly mixed. I separated the first box into two pans (9×13), one had a little more than half, the other, of course, a little less than half. I made a 2nd box in one 9×13 pan and let them cool over night.

The next morning (the morning of my daughter’s 5th birthday party), I took the thinnest layer and put it on the platter with some wax paper under the edges so I wouldn’t have a frosting mess anywhere. I frosted the top, then put the thickest cake on as the next layer. I trimmed the top to make it relatively flat, and then frosted the entire thing, top and all sides. I frosted the medium thickness cake layer on a plate all by itself, just on the top and put it aside.

Next, I put a bunch of toy jewels, necklaces, coins, etc on the cake on the front half of the base of the ‘treasure chest’. Once I did this, I put the top (or lid) of the treasure chest on, very carefully making sure not to break that layer of the cake, esp since it was not full thickness. I finished frosting the top and all sides, then used a fork to scratch what looked like a wood grain in parts of the cake.

Next, I sprinkled crushed vanilla wafer cookies around the treasure chest to look like sand, then finished adding all the extra coins and jewels around the cake to make it look as if some had spilled out.

For the straps on the treasure chest, I was stretched for time so I grabbed some fruit roll ups and cut them to the appropriate length and used them for the latch and other straps. It was simple, but so fun, and was a HUGE hit at the party.

Everyone loved it, my daughter really enjoyed helping to assemble it by putting the jewels in and around the cake, and all the guests were saying it was so great they felt sad to have to cut into it.

Just remember when you’re done with the frosting, and before you put all the jewels down to take a knife (steak or table) and run it under the cake edges but above the wax paper and pull the wax paper out so your cake platter is clean and beautiful.