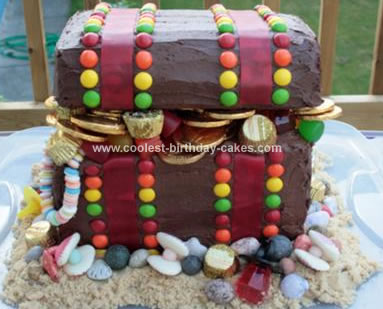 I found this Treasure Chest Cake online somewhere and decided to try it for my nephews birthday. It was by far the hardest cake I’ve ever made, and I haven’t made many.

I made 2 9x 13 chocolate cakes (however I used 2 cake mixes for one of them.) I used melted chocolate and “glued” the first 3 layers together. All sized the same. Cut the lid to the same size and shaved a bit off the edges to make it kind of curved at the top (like a treasure chest). Then took melted chocolate and did a thick layer on the bottom part of the lid.

Put it in the fridge to harden! Then I iced the bottom part of the cake with chocolate buttercream icing (needed just over 1 batch). Then I iced the lid (once the chocolate had hardened!). I took a bunch of leftover pieces and formed a wedge for the lid. Glue the wedge on with melted chocolate.

Then I lathered on a ton of melted chocolate on top of the wedge, placed 2 ringpops underneath and somehow made that lid stay put. This was the make or break part of the cake. Put it in the fridge ASAP. Once it hardens the fun begins.

I used fruit by the foot, skittles, Reeces peanut butter cups (Rolos would be nice but they need to be individually wrapped in gold paper!), chocolate gold coins, ring pops, ju jus, candy necklaces rock candy, some shell candies. I found the clam shells at Scoop ‘n Save. Oh, and a tip, use some melted chocolate to “glue” some of the coins into place, they’ll fall out if not wedged really well!

I used brown sugar for the sand. I think that’s it. This cake weighs a ton! It also took a lot of time and cost a lot! Candy isn’t cheap! Oh and guard it from the munchkins! My 2 year old daughter was drooling over it and licked it while I was snapping pic’s. If you want to see kids drool this is the cake to make.