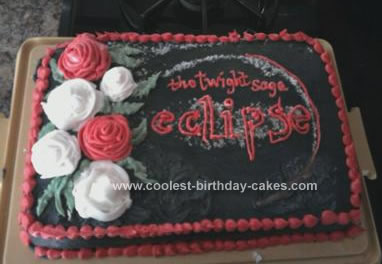 This Twilight Cake was difficult and didn’t quite turn out how I had expected, but everyone tells me they loved it. The roses I did a few days before hand, its all buttercream icing, and I found a picture of the eclipse and printed it out, traced it on wax paper and used a toothpick to guide my piping. I used white sugar crystals to line around the moon part for added effect. I had intended on the eclipse part to be in white sugar crystals as well..didn’t quite go as planned, so I piped it in red instead.

I then used my finger to swirl the clouds. I crumb coated this cake in white so when I swirled the black over top it, it made a gray effect for clouds.