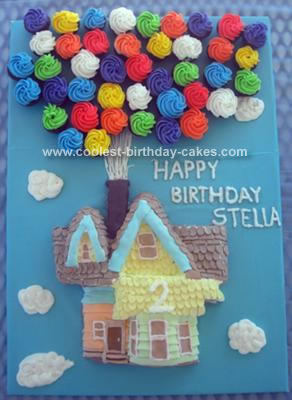 I made this Up House Birthday Cake for my daughter’s second birthday. We had the movie on one afternoon and she was completely mesmerized. I had been trying to think of a creative way to incorporate toddler-friendly cupcakes into her birthday and so the idea was born.

I found a color picture of the cake online and printed it out as a guide while decorating. For the house I used a 2-D castle cake pan and made two cakes. I cut the main gable and body of the house from one and the smaller window gable and the rest of the roof from the other. I carved out the indentation for the yellow shingles and the bay window before giving the whole cake a crumb coat with regular vanilla frosting. I used fondant I tinted for all the shingles, doors, windows and siding. I cut the rectangular pieces with a knife and used an oval fondant cutter for the round pieces. I piped the pink window frames with royal icing.

The balloons are made from mini-cupcakes frosted with butter cream frosting. (I used almond extract in place of the vanilla because I like the taste a little better.) The balloons are tethered to the house with white royal icing. The cake is resting on a cake board I covered with blue wrapping paper. I piped the lettering and clouds freehand with white butter cream frosting using Wilton #14 and #12 tips respectively. I tried to make the writing look like skywriting.

If I did this cake again, I would tint the fondant and icing ahead of time to speed up the process. I think I would also have put a little wax paper along the edge of the cake to protect the blue paper from getting grease spots and then pulled it out before adding the clouds. Then I could have placed them wherever I wanted instead of using clouds to cover them up.