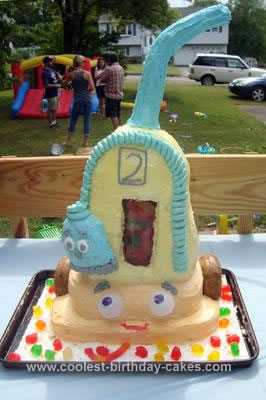 My son is crazy for cleaning. It’s his favorite pastime. Naturally, I want to reinforce this behavior! So he has lots of cleaning-oriented toys, and his favorites, by far, are vacuums. He goes nuts screaming “Vacuum! Vacuum!” when he sees any vacuums at his daycare or in stores.

So, when I was planning his 2nd birthday party, a cleaning theme was an obvious choice to me. And what kind of cake would make him happier than a Vacuum Birthday Cake?!

Obviously, a vacuum cake is pretty hard to come by at the local bakery, so I decided to take it on myself. I’d never carved a cake before, and I wanted to model it after his favorite Playskool vacuum, so this was a rather ambitious first attempt!. After a bit of internet research and investing in a few cake decorating tools, I was ready to give it a whirl, and just hoped it wouldn’t suck (pun intended).

The first surprise was that the two 9×13 cakes that I made and froze overnight before carving did not yield enough cake to work with, so I had to pop a third cake into the oven. I used a “hardy” cake recipe for the first two cakes which was more ideal for stacking/carving, so I was a little concerned about how well the third “normal” cake would be since I didn’t have the ingredients on hand to doctor it up. The third cake was a little more crumby, but it did the job as the bottom layer which needed the least amount of carving. I found that freezing the cakes before carving and frosting definitely helps!

My goal was to make it completely edible, which I achieved, except for its big ping pong eyeballs, the pieces of cake board between layers, and the dowels used for support from top to bottom. I used rice krispie treat mixture to mold the vacuum’s handle and the hand brush, and its hose was just piped butter cream frosting. For the wheels, I simply attached donuts using mini pretzel rods.

The biggest challenge was building it around a drinking glass as the vacuum’s dust receptacle. I filled it with gummy worms and bears since those are my son’s favorite candies. As a finishing touch, I frosted the serving tray to look like carpet, and and placed gummies all around the base of the vacuum, except in the back to give the illusion that it already vacuumed them up.

The cake was a big hit at the party. When my son saw it, he exclaimed “Vacuum! Gummy bears in there!” and promptly swiped one from the tray. Success! 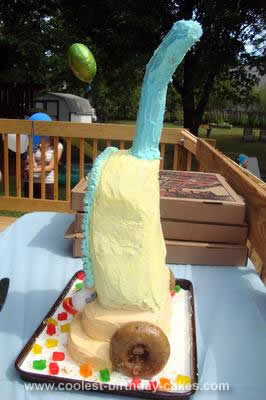 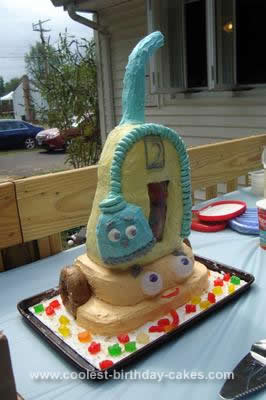 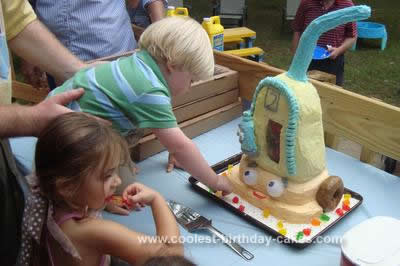