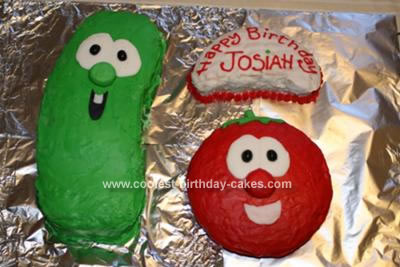 My Mum and I tried to make this Veggie Tales Birthday Cake very simple, we were worried that it wouldn’t come out the greatest, but I was REALLY happy with how it came out!

We made two round cakes(one used for Bob and the other for the little part with the writing on it) with one cake mix and then with another we made a 9×13 for Larry. We made the icing by ourselves with and added the food coloring. For the red we got a ‘professional’ red food coloring from Micheal’s as we heard that the cheap stuff will usually go pink(either way, this stuff was NOT expensive at all and the shade of red was just perfect!).

We cut out Larry’s shape from the 9×13 cake, so that he wouldn’t be so straight up and stiff. Then we ended up cutting half of one of the round cakes(the one with the writing) and added that onto the bottom part of Larry, to make him taller than Bob, because without that they were almost the same height and it looked kind of funny. Once we added on the bottom part we just covered over it with icing and you couldn’t even tell the difference.

We made their noses out of icing, just rolled it in a small ball in our hands and then put them in the freezer for a while until they were solid.

The eyes were also made with icing. We actually traced a poster size picture that my son had of Bob and Larry that just happened to be almost the exact sizes that we needed for the cakes. So we traced their eyes and mouths so that we would know how big they should be. I used a large spoon to scoop one some white icing for the eyes and then with a toothpick, spread it around, making sure that they kept their egg-like shape. I did the same for Bob’s mouth and Larry’s mouth was a black piece of construction paper with a glob of icing for the tooth. We used jellybeans for the eyes and they were just the right size. for Bob’s stem we just used the leftover green icing and again, shaped a little piece and froze it for the little part sticking up on the top.

I was really nervous about making this cake but my Mum and I had a blast and we were so happy with the end result! My son loved them and had a great 1st birthday party.