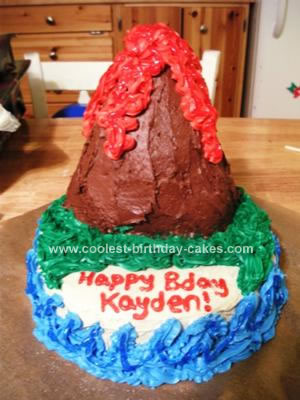 I made this volcano birthday cake for my son’s third birthday after he requested an “erupting volcano cake”. The cake was actually really easy to make.

I used cupcake icing to do the lava, waves and grass – the kind in a can with a decorating tip on top. Then used gel icing (the little squeezable ones) to add the darker colors on the lava, waves, and to write “Happy Bday”. I also sprinkled a small amount of sugar on the “sand” to give it a more “sand-like” appearance. Overall I think it was super easy and didn’t take much time at all to make! My son LOVED it!