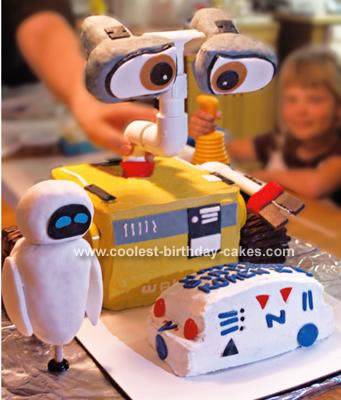 I was requested by my nephew to make a WALL.E cake for his 4th birthday. I didn’t get a chance to see the movie so I went to the Disney web site to see what the character looked like. My nephew also was crazy about WALL.E’s girlfriend Eve, which he called Eva.

The basic shape for WALL.E’s body and tires was easy. The eyes were more of a challenge. I made the eyes out of Rice Krispies and marshmallows. I molded the shapes and covered them with rolled and colored fondant. I also made Eve out of the Krispies mix and covered her in white fondant with a colored insert for the face and eyes. The arms were also made of fondant, shaped and dried before attaching. I use a thin dowel to support her and attached it to a plastic pad that is normally used for protecting furniture legs.

The arms and neck were PVC pipes and joints. An additional cake was made in front for the Happy Birthday text and the candles. I think that if I made another one, I would not make the eyes out of the Rice Krispies. They were a little heavy. I would use styrofoam instead but, still cover them in fondant.

My nephew was thrilled with the cake and said he just loved it. That made it all worth while.