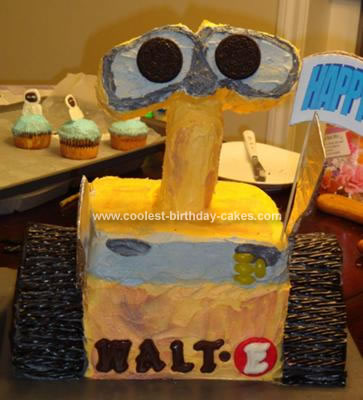 My son’s name is Walter (Walt for short) and he was born right when this movie came out so what better theme for his 1st birthday then the Wall-E theme.

I made this Wall E Birthday Cake using 4 – 2×8 square cakes. I stacked three of the cakes and cut the 4th diagonally and trimmed to make the tracks. I made buttercream icing and just tinted it until it looked like the picture I was following. I just gently spread a darker orange in areas to create the rust spots.

The neck I made out of toilet paper rolls that I taped together and covered in tin foil. The head was made out of Styrofoam and the hands I used flat wood spatulas and just covered them with tin foil.

I used Oreo’s and pieces of black licorice to make the tracks and jelly beans to make the control panel. I was going to use fondant to make the Wall-E letters (or in this case Walt-E) but I’ve never worked with it and don’t really like it for taste or anything so I decided to use chocolate. It looked and tasted great!!

It was really only my second attempt at a 3D cake and I think that it turned out pretty good.