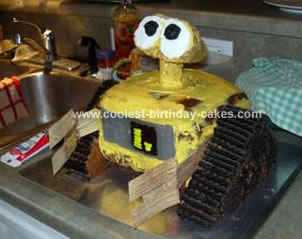 I made this Wall-E Birthday Cake for my son’s second birthday. I used three cake mixes and made five eight inch squares and some ice cream cone cakes. I used four of the squares for the body, trimming the bottom one in some on the front and back to make it look like he is off the ground.

The other square I used for the treads. I iced the whole thing in chocolate icing then iced yellow over the body, mixing it in some to make him look a little worn out and old. I used a chocolate bar with decorators icing and gel to make the computer screen and “E” emblem. I used black licorice for the treads and Oreo cookies and pieces of black licorice for the wheels.

I used ice cream cone cakes for the eyes. I tied them together with yarn and then set them on a paper towel roll cut in half and taped together at one end and iced all over. The eyes were done with decorators icing. I made the hands with dowel sticks and manila paper.