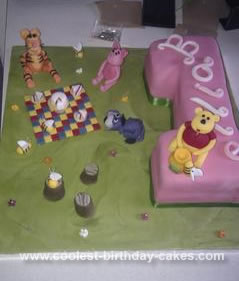 I made this Winnie The Pooh cake for a friend’s daughter’s first birthday. She asked for a Winnie the Pooh cake but didn’t specify any cake flavor or what exactly she wanted, she basically gave me a free reign on it.

The cake board was covered with rolled fondant which I colored green but didn’t mix thoroughly so it had light and dark patches to create a forest floor. I made the tree stumps with fondant colored brown and not mixed properly to create bark texture. I made the picnic blanket from colored fondant, red, blue and yellow and used a square cutter to cut out enough squares to create a 9 x 9 square using the same color sequence throughout.

The fondant figures were made from tutorials I found on the web. The bees were made from yellow fondant which I painted black stripes on with food coloring and a brush and left to dry and the antennae were made from flower stamens colored black in the same way.

The cake was a chocolate fudge recipe and baked in a number one shaped cake tin, then covered with pink fondant. I added the child’s name by using fondant shaped into sausages and then cut and shaped into letters.