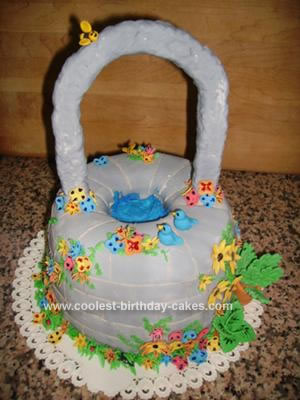 When my uncle bought his beach house, the first thing he did was build a wishing well in the garden, so when his birthday came around, I “built” him another one.

This homemade wishing well cake was made with two batches of sponge cake (it has to be a nice, firm sponge otherwise it won’t hold the weight). I baked one batch in two nine-inch pans, and the other batch in a nine inch bundt (I couldn’t find my flat top bundt so I used the rounded one-which worked out fine anyway).

The cake is moistened with a rum syrup and layered with raspberry syrup and mascarpone cream filling. I like this filling because it turns out nice and thick and won’t creep out of the layers. Use the bundt layer for the top, then covered it all with vanilla buttercream and gray fondant. I made the flowers and little animals out of fondant about a few days in advance, so they had time to dry. Then,just started “planting” the flowers and plants around the cake. The plants are also fondant (the cactus is made with toothpicks).

The top part of the well is made with rice crispies and marshmallows, covered in fondant, which worked out nicely – I like the pebble look of this homemade wishing well cake.