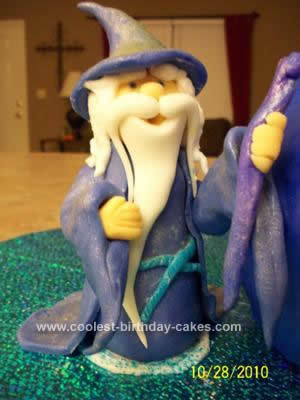 I found this Wizard and Crystal Ball Cake Idea in a book by cake decorator Debbie Brown and was making it around Halloween, so thought that it was appropriate.

I used the Wilton Sports ball pan to make the crystal ball, using my own yellow cake recipe and added some purple and blue food coloring swirled in it. I covered the cake with the Wilton buttercream recipe and a homemade MMF that I colored with a Royal Blue and Violet mixed coloring, kind of swirled together.

The wizard was made out of modeling chocolate (1 lb almond bark melted with 7 tablespoons of light corn syrup added after it was melted. Don’t add the corn syrup until it’s all melted. Then add it and mix. Pour the chocolate on waxed paper about 1/2 inch thick and cover air tight and put in refrigerator for a couple of hours until set. Once it’s set it will be hard, but break off a piece and then roll it in your hand until it’s like playdough. From there you can color with either powder or gel food coloring and shape.)

This was a fun cake to make and everyone thought it was great. This was also my first attempt with modeling chocolate and I think it works a whole lot better than fondant for figurines. You just place your pieces in the refrigerator for a couple of minutes and then used melted chocolate to connect any of the parts.

Have fun making your wizard and crystal ball cake, I know I did. 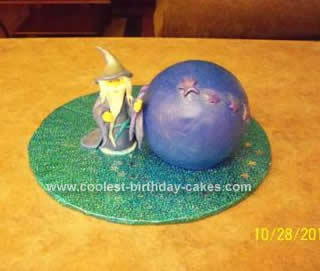