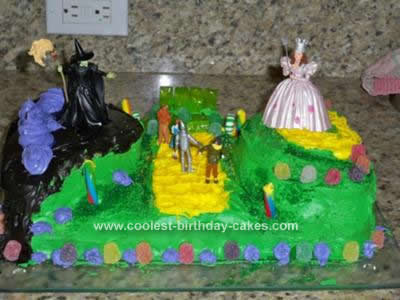 The cake was two flavors, chocolate and vanilla-fun fetti cake (mixes!). First I searched online for ideas and also for a place to purchase the character figures. I bought the Glinda and Wicked Witch ones first and then to save money I ended up buying the Wizard of Oz game (for when she’s older) and used the figures from the game on top of the cake.

The issue was that the Glinda and Witch figures were bigger than the others. To counteract that, I decided to try to make it look like Glinda and the Witch were further away. First, I used a half a sheet on the bottom of the chocolate cake and then cut out pieces of the funfetti cake from Triangles to stack on top. I also dyed all of the frosting the night before so it was easier to frost. Refrigerated and then let it warm for a half hour before frosting so it was soft (you can also zap it in the micro).

Then I frosted everything and added on the candy. I used jolly ranchers for the Emerald City (if you run them under water they get very sticky and will stick together) and other candies too. I love the result and hope it helps inspire you too!