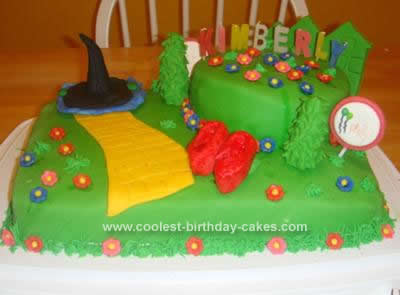 Let me preface this by saying that for a cake I did not want to make, I have to admit it came out OK. The reason I didn’t want to make this cake is because “The Wizard of Oz” is probably one of my least favorite things. I know, it sounds un-American, but I just have never liked the story and I especially dislike the movie. Having said that, when I told my co-worker that I would make her birthday cake in whatever theme she chose, I wasn’t expecting her to choose “The Wizard of Oz”.

So, I got stuck making a cake I really didn’t want to make and this Wizard of Oz Birthday Cake was the result. I knew I didn’t want to include Dorothy, the Tin Man or the Lion, so I tried to incorporate some of the other features, such as the Emerald City, the Yellow Brick Road, Dorothy’s Red Shoes and, of course, the melting witch. The cake was filled with butter cream and raspberry filling.

I used a regular sheet cake pan and one 6 inch round which was 4 inches deep. The Yellow Brick Road, the melting witch, Ruby Slippers, trees, flowers and Emerald City are all made of fondant. I sat the witch’s hat on a puddle of water also made of fondant.

My co-worker was over the moon with the cake, so I guess all is well that ends well. It wasn’t as bad as I thought it would be, again considering that I don’t like “The Wizard of Oz”, but it did make her happy and I guess that is all that really matters.