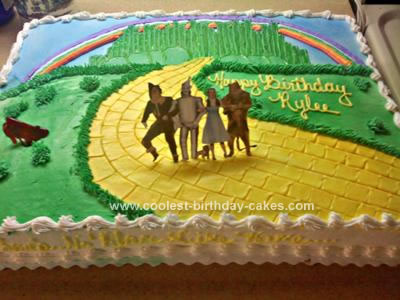 This Wizard of Oz Cake was my first attempt at making this cake. I have since made many more! This one, which was half white half chocolate 1/2 sheet, was made for my husband’s coworker’s 6 year old daughter.

I started by base icing in butter cream. I then took cans of green and blue Wilton Airbrush and sprayed the ‘sky’ and ‘ground’ (there is quite a bit of over spray with it so it’s best done outside). The first item on the cake I started with was The Emerald City. I marked it out with a toothpick to have a visual of where to put everything else.

I first used leaf green with a #9 tip then outlined it in Wilton Sparkle Gel (green). Next I did the rainbow (colors picked by the birthday girl). A number #7 tip was used for that. The yellow brick road came next and again was marked with the toothpick. Golden Yellow coloring was used to color white butter cream. I used a #9 tip again to draw and fill in the road then smoothed it with a curved small spatula.

Using a toothpick I marked out the ‘bricks’ in the road. To add a little more to the visual effect of the cake I used Wilton’s grass tip to make ‘pods’ of grass. The ruby slippers came in a package of 12 from DecoPac and are actually bookmark cupcake picks.

For the characters, I used good quality photo paper and printed a 4×6 picture (that I asked permission to use) of them. I took a razor blade edge and on cardboard, I traced around the image cutting it away from the excess paper. To support the image on the cake I simply taped toothpicks to the back and put them in the cake making the image stand up right. I then used a regular border on the bottom of the cake but a reverse shell border on top to make it look a little more fancy.

The writing came next (There’s No Place Like Home is written across the front) and… TA DA! My first Oz cake! I got rave reviews on it, and as I said, have made many more since! Thru trial and error I learned you can not use green chocolate covered pretzels for the Emerald City and that jelly beans and Skittles do not work for the rainbow! The little girl loved it (as did her party guests!) and her mom couldn’t have been more pleased and told me it was so much more than she ever expected.