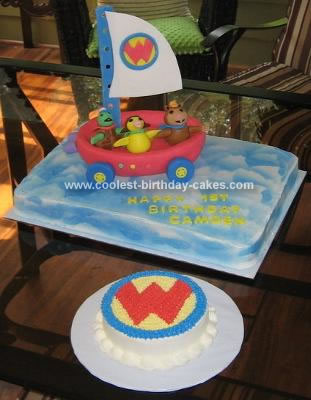 The base of this Wonder Pets Flyboat Birthday Cake is a half sheet cake frosted with white buttercream. I achieved the cloud effect by tearing a paper towel in half and spraying the cake with Wilton’s Color Mist. I started at the top of the cake and gradually moved the paper towel down the cake to get the cloud effect.

The flyboat is completely edible. It is made out of rice krispie treats. I made a regular batch of rice krispies and put them in a bowl to achieve a round shape. After they were cool, I shaped it in to the boat shape and covered it with chocolate clay. The sail is made with fondant.

The wheels are Oreos that have been covered with fondant. The star and circle on the wheels are also fondant. I cut out small fondant circles to represent the lights and attached those with piping gel. The engines are fondant that are attached with toothpicks and piping gel.

The Wonder Pets are made out of fondant. They were molded and put together using toothpicks and piping gel.

The smaller cake is a round 6 inch cake that was used as the smasher cake. I used buttercream to make the logo on the cake. I used a star tip to pipe the logo.