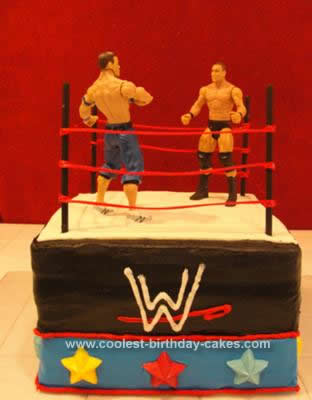 I made this Wrestling Cake Design for a friend’s son’s 10th birthday since he was a big wrestling fan. I did a lot of research on-line, looking at every possible wrestling cake I could find for inspiration. I tried to incorporate features from several different cakes to make it my own and not a direct copy of someone else’s.

This cake was made with 3 10″ square pans at 2″ deep. I really wanted to use fondant but an experiment a few nights before using the black fondant didn’t work very well so I decided to go with regular icing and use the paper towel method of smoothing it out. I did use the Wilton black dye, took quite a bit, but the color came out pretty rich. The stars on the side were made with the Wilton candy melts and star mold.

The white mat on top was made with a homemade marshmallow white fondant and cut to size. I piped on black icing around the edges of it since the black icing did fade through a bit around the edges. The ring was made using dowel rods and a red roping I found at a fabric store.

The wrestling characters were bought at Walmart and luckily had small holes in the bottom of their feet, so I was able to use a skinny dowel rod and hot glue them into the feet to use for stakes. The stakes later released out easily with no damage to the wrestlers!