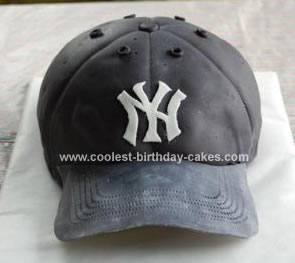 I made this Yankees Baseball Cap Birthday Cake for my son’s 11th birthday party. He was home at the time I was working on it but didn’t want to see it until it was all done. After working on it for several hours, I told him he could come into the kitchen to see it. He walked in, looked around and asked “where is it?” He thought it was just a regular hat on the counter – he didn’t know it was the cake!

At the party, all of his friends had the same reaction. They didn’t realize that it was an actual cake until we pointed it out to them. It was a huge hit with the 11 yr. olds!

This was my first attempt at making a baseball cap cake. I was extremely pleased with how it turned out. The only non edible part is a piece of cardboard for support under the bill of the hat and some skewers to hold the brim in place.

The cake is white cake with buttercreme frosting. It is covered in fondant that I took great care in tinting the precise blue of the Yankees.

All in all, a very successful cake.