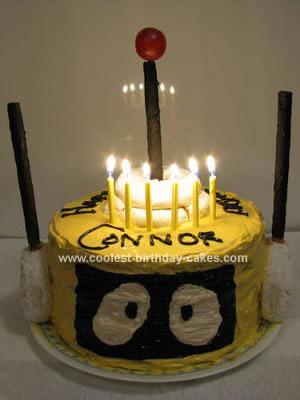 I used one box each of the Pillsbury 50% less sugar cake mix of vanilla and devil’s food cake mix made into 9″ round pans. To make them lower fat I substituted apple sauce instead of oil in the mix. It does make them a little less moist. When I stacked the 4 layers I alternated them.

I also used one tube of Black cake decorating frosting for the face and writing on top and to paint the antennas.

antenna ball: red tootsie pop sucker – it fit perfectly inside the cereal straw (I had been stumped for a while about what to use. I had this epiphany when I was at the store in the middle of the night while I was waiting for layers to cool and realized I needed frosting for between the cake layers).

The side antenna fittings and top cap are powdered doughnuts attached with toothpicks.