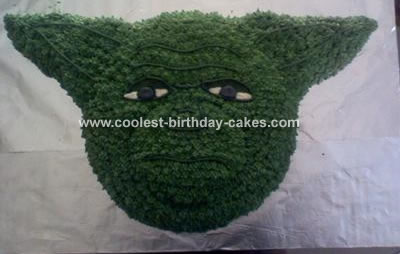 This is a Yoda cake I was asked to make for a Star Wars themed birthday party. I also made a Darth Vader cake (which was easier as I was able to find a cake pan for him online).

For Yoda, I used a Wilton Animal Crackers cake pan (originally shaped like a panda head with rounded ears) and shaved about a quarter of an inch off of the top of the ears to make them slightly lower. I made the extended part of Yoda’s ears separately on wax paper by layering “stars” (Wilton tip #18) and freezing the ears by laying them flat in the freezer every two layers until they were approximately the same height as the reduced cake ears.