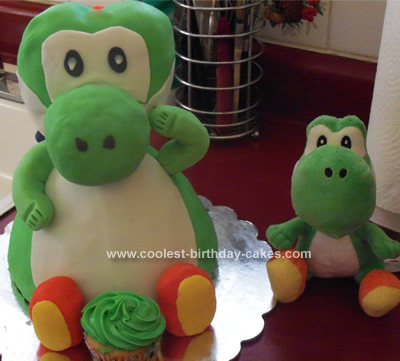 I made this Yoshi Cake for my son’s 6th birthday. He is addicted to video games and loves to play Mario Kart, so my husband and I thought that would be a perfect theme for his party. There are a plethora of ideas on the internet with ideas for that theme.

For this cake I used my Wilton Wonder Mold pan for Yoshi’s body. I filled it with a little more batter than usual to make sure his body was tall enough and full enough. In retrospect I probably would not fill it so full if I made the cake again. I used just a regular “Funfetti” cake mix for the cake.

I crumb coated his body with icing and put it in the freezer to stiffen up a bit before I covered it in store bought fondant that I tinted green. His head and nose are made of rice crispy treats that I also covered in fondant. His head is really heavy so I used tons of toothpicks and a dowel rod to help hold his head up. I also took the rod from the middle of my wonder pan and stuck it back down into the cake to give the dowel rod more support. I made his feet out of two cupcakes that were a bit misshapen and covered them in fondant as well. His arms and shell are also made of fondant.

I sat my son’s plush toy next to the cake to compare it to my work. It is not an exact replica but it’s close. If I make a cake like this again, I will make his arms and feet much bigger.

The cupcake were made of the same “Funfetti” cake mix and iced with green icing. I made the Yoshi eggs out of gum paste and colored the dots on them using a Wilton Food Writing marker.

My son loved his cake and it was a big hit at his party. 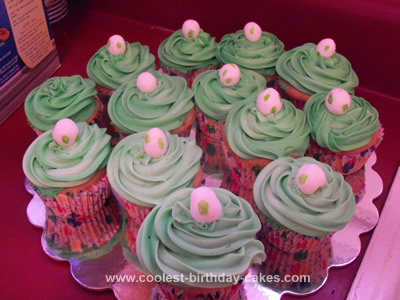