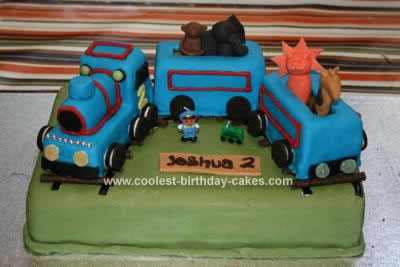 This was for my son’s second birthday party. I try not to have TV character tie-ins, though the cake ended up the right colour for Thomas.

The homemade zoo train birthday cake was made from 2 x 20cm square Madeira cakes. I trimmed 5cm from each cake to make the train and carriages and sugarpasted the joined cake.

The green sugarpaste “grass” was coloured with Christmas Green paste colouring with added edible glitter. I used “matchmaker” chocolate sticks for the sleepers and unrolled a Bassetts “Catherine Wheel” liquorice for the sleepers.

The train was made from 2/3 of one of the sliced cake edges (I made a “coal shuttle” from the remainder but it didn’t fit on the cake!). The engine room is built up with cake joined with frosting, the cylinder of the engine is a mini Swiss roll joined on with frosting.

The details on the engines are in black Dr Oetker ready to roll coloured icing. The headlights and tail lights are “jelly tots” sweets attached with a small dot of frosting, the front windows are mini smarties. The wheels are mini Oreo cookies and silver cachous on the front of the engine.

I made the animals from coloured sugarpaste (the giraffe is “teddy bear brown” and “chocolate” reday coloured icing). I placed a toothpick through the centre of each to give it stability, and also hold the animals in place when they were placed in the carriages.

I positioned the carriages on the homemade zoo train birthday cake before the final detailing in red Dr Oetker writing icing. I wasn’t happy with this- it was hard to control and had an uneven texture- next time I will make my own royal icing and pipe it.

The only bought items are the “Lovely Chubblies” train and conductor candles. It looks great, but it wasn’t actually technically difficult – you just need patience and time to do it.