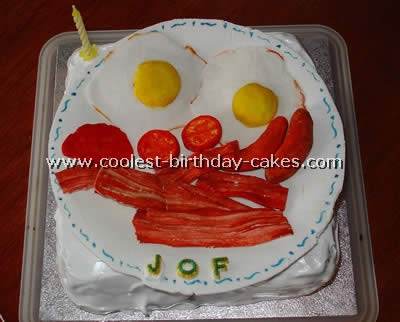 I made this creative birthday cake as a simple spice cake for a close friend who believe it or not loves his “fry up” breakfast! I iced the cake with “fluffy icing” made with caster sugar and egg white. I then made the plate out of pastillage moulded over a real plate and painted the design around the edge once it had dried.

The bacon, eggs, sausage and tomatoes and tomato sauce I made with homemade fondant icing which I then painted. The bacon was first cut into the bacon slices and then I added strips of varying Bacon colors as the streaks in the bacon. The “topping” was then placed onto the top of the cake.

Seeing as I was looking for a free cake recipe, I got the idea from a picture in a cake book by Jane Asher. The “birthday Boy” still has the topping as a keepsake which was the best compliment I could have received.